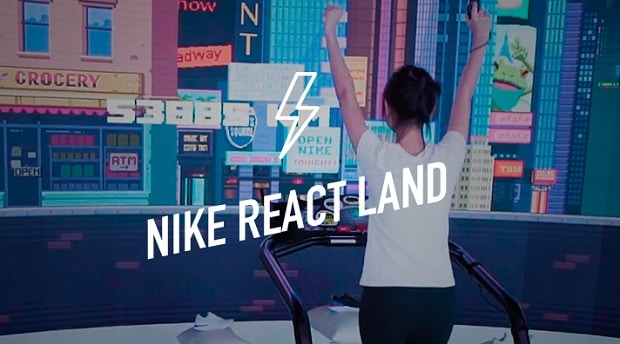 To promote the launch of its cutting-edge new running shoes, Epic React, Nike developed an immersive Reactland initiative that transported users into the heart of a virtual video game (complete with an Avatar of themselves).

The game was designed so that gamers could experience the brand’s latest sole cushioning technology. This gaming event was then filmed and combined with a digital marketing campaign rich in content across a host of channels and touchpoints, including website, mobile, social media and video.

Wieden+Kennedy Shanghai wanted to make the launch of the new Nike React shoes into an one-of-a-kind, unforgettable experience. Together with UNIT9 they have created a unique retro gaming installation, where player faces were used as actual in-game characters and the controller was a real treadmill.

“The concept neatly brings together a handful of features for the customer; A product trial, a fun experience with personalisation and a shareable at the end.” Alexander Horton, Director

How do you truly test out the new Nike React shoes? By running in them, of course. But Wieden+Kennedy Shanghai didn’t just want to take Nike fans on a same-old-same-old run—they wanted to create an experience people would never forget. We were invited to build an installation across China that runners couldn’t stop talking about. It’s a real-time video game, and the players are the fans.

The experience was set up in four major citie. Using a green screen, they snapped images of each player so they could place them directly into the game.

Players were invited to strap on a pair of Nike React shoes and run on a treadmill so they were moving through the game world as an actual character that looked just like them.

The virtual world harkened back to old school games like Super Mario Brothers, but with a modern twist—they ran through streets, jumped over obstacles and climbed up buildings.

The brand not long ago announced a share value increase of 7%, putting it back in direct competition with Adidas in the sneaker market, and its innovations like its Reactland campaign that help to drive this success.