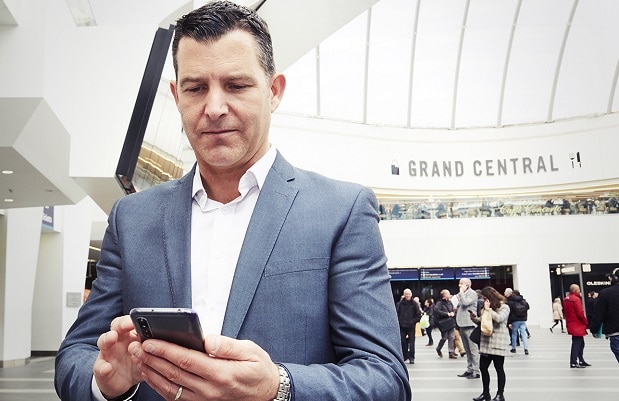 Vodafone has turned on 5G connectivity at Birmingham New Street, making it the UK’s first train station to trial the superfast technology.

This announcement comes as part of Vodafone’s mission to activate 5G at a number of key commuter locations across the UK during 2019; it will be switching on the new network in 19 towns and cities by the end of the year.

Mayor of the West Midlands, Andy Street, tested the region’s new technology on the New Street concourse. Passengers at the station were also invited to test 5G speeds using a 5G router.

When compatible 5G handsets and devices arrive later this year, commuters in busy locations will be able to load a web page or a video instantly. Thanks to super low latency, they will be able to stream a movie or download a work file over 5G seamlessly without buffering or lag. Vodafone is rolling out 5G to a number of key commuter locations across the UK during 2019; and will switch on the new network in 19 towns and cities, including Wolverhampton, by the end of the year.

The introduction of 5G services supports the West Midlands Combined Authority’s strategy to give consumers and businesses in Birmingham and the surrounding area the very latest digital communications.

Live testing is now also taking place at a number of sites across the city. The sites are all connected to Vodafone’s multi-billion-pound single optical fibre converged network, which is already providing customers in the city with fast 4G mobile, home broadband, Internet of Things (IoT) technology and business services.

Mayor of the West Midlands Andy Street said: “I am delighted that Vodafone has brought 5G to Birmingham; and that New Street is the UK’s first 5G-enabled rail station. When I was Managing Director at John Lewis, we saw online shopping transform the retail industry. I believe the West Midlands 5G project will enable our businesses, hospitals, public transport and universities to explore new services and stay ahead of their competition.”

Anne Sheehan, Director of Vodafone Business said: “We are delighted to bring 5G to the West Midlands, giving businesses, residents and visitors fast and reliable connectivity even in exceptionally busy locations such as train stations and airports. 5G will enable new applications and experiences and support the development of connected cities and smart transport solutions. It will help businesses to implement emerging technologies such as artificial intelligence, IoT and robotics. We look forward to continuing to work with Andy Street and his team to deliver the vision of a more prosperous and digitally connected region.”

Leader of Birmingham City Council Cllr Ian Ward said: “The West Midlands wants to lead the way in 5G and this is an exciting step forward. 5G will help us supercharge the West Midlands economy; and the possibilities for businesses, individuals, investors and innovators are huge.”

The West Midlands Urban Connected Communities 5G Project (UCC), initiated and jointly funded by the Department for Digital, Culture, Media and Sport (DCMS), will create the UK’s first region-wide 5G test bed and will roll out later this year.