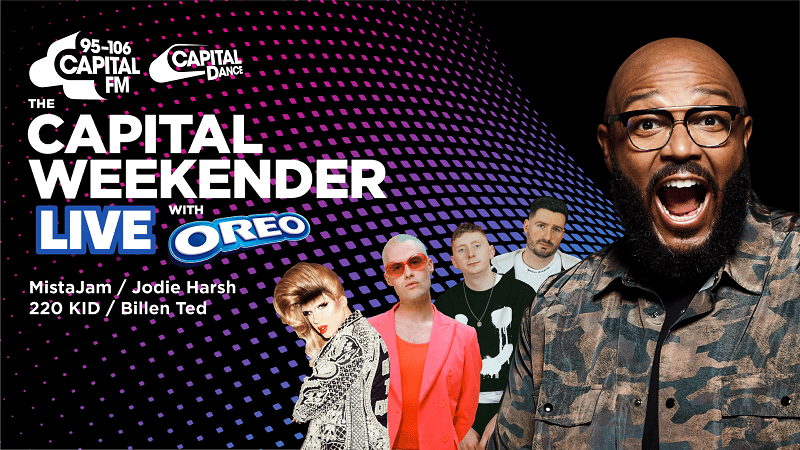 OREO is teaming up with media group Global to host an exclusive live music event in London; The Capital Weekender Live with OREO.

Music fans can enter to win tickets to the exclusive gig by scanning a QR code on a Capital Weekender Live with OREO ad featured on Global billboards nationwide.

In celebration of live events returning this summer, Capital Dance presenter MistaJam will be hosting the rooftop party on Friday 27th August at London’s Century Club. Jodie Harsh, and Official Big Top 40 chart-toppers Billen Ted and 220 KID will join MistaJam and play epic sets for competition winners on the night.

The QR code will also be posted to @capitaloffical’s 1.4m followers on Instagram and through an exclusive URL on Capital’s website and social feeds. On air, listeners will be able to win tickets to the exclusive live show by listening to Capital and Capital Dance. The show will also be streamed live on Global Player.

Mike Gordon, Chief Commercial Officer at Global, said, “It’s a pleasure to partner with such a brilliant brand in OREO to bring a special event like the Capital Weekender to life. Not only will our interactive media campaign supercharge awareness of the event to prospective competition winners, but many more music fans across the country will be able to enjoy this fantastic line up of artists live on Global Player.”

Rafael Espesani, Senior Brand Manager at OREO, said: “We are thrilled to collaborate with Global and an incredible line up of artists to host our first live music event together. OREO is all about playful connections which bring people together; so, we’re incredibly excited to create some very special moments for our lucky competition winners through the unrivalled power of live entertainment.”