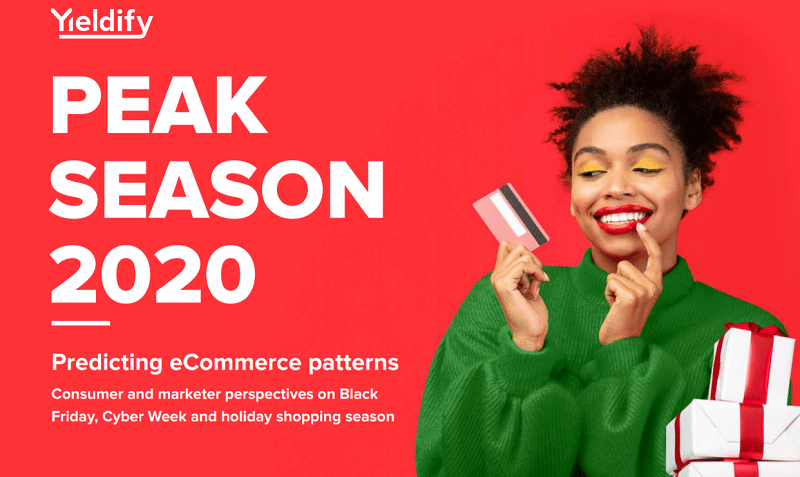 Marketers are approaching peak season activities with caution this year amid the ongoing pandemic, with only 45% expect to outdo last year's results vs 90% last year, according to new research.

As eCommerce marketers adapt their peak season strategies post-pandemic, marketing tech company Yieldify has commissioned original research examining the impact of the crisis. 400 business leaders and 2000 consumers were interviewed across the UK and the US.

The report reveals that 33% of eCommerce companies are opting out of peak season activities – a landmark increase from just 6% last year. However, consumer spending is trending in the opposite direction, with 34% of consumers increasing their peak season spending year-on-year.

1. COVID-19 saw website traffic and online sales soar, meaning Christmas came early for many eCommerce retailers this year. However, with disruption still at play, marketers are approaching peak season activities with caution and only 45% expect to outdo last year’s results vs 90% last year.

2. There’s a clear contradiction between marketers’ priorities and what consumers really want. Brands might be opting out, but consumers are opting in: 8% more consumers plan to shop online this peak season than last year, meaning marketer concerns may be unfounded.

3. This cautiousness is reflected in a notable decrease in ‘generosity’. While discounting still remains king, offered by 41% of participants (compared to over 70% last year), the largest proportion of retailers plan to offer an 11-20% discount.

4. This year, brands are actually faced with less competition for an increased and more engaged customer base. Which means eCommerce leaders have a golden opportunity to increase market share this peak season…if they choose to take it.

The report, “Peak Season 2020: predicting eCommerce patterns”, reveals what the eCommerce industry can expect during Black Friday, Cyber Week, and December’s holiday shopping season in the wake of the industry’s changes as a result of COVID-19. Based on research conducted with over 400 US and UK eCommerce leaders and 2000 consumers in August of this year, it unveils a significant disparity between eCommerce marketers’ predictions and consumer intent.

eCommerce leaders were found to be largely pessimistic about their peak season prospects: while in 2019, nearly 90% of marketers expected to outdo their previous year’s results, only 45% are so positive this year. However, only 18% of consumers indicated that their peak season spending would decrease – in fact, the data showed an 8pp. growth in the proportion of consumers shopping mostly/only online. Consumers also indicated that their changed behaviors as a result of COVID-19 would continue, with over half (52%) planning to shop on sites new to them since last year’s peak season.

Waleed Al-Atraqchi, Chief Executive Officer at Yieldify, commented:“In times of such uncertainty, it’s natural that many eCommerce leaders feel cautious ahead of peak season.However, this report shows that this disruption could present a golden advantage for the eCommerce leaders who ‘opt-in’ to peak season activities. Consumer appetite is bigger than ever and the competition for this demand may be quieter than this year: with tactics such as strong personalization in place, the potential rewards are huge.”

The research showed some of the reasons behind eCommerce leaders’ hesitance. Over 25% cited a lack of consumer demand as their reason for non-participation, with increased competition the second most popular reason. With both these objections largely debunked by the wider findings of the report, some eCommerce companies appear to be overly conservative. This was even seen in perceptions of Black Friday: while 23% of eCommerce leaders were concerned that the holiday is seen as a marketing ploy, only 3% of consumers agreed.

The atmosphere of caution is reflected in the strategies that participating eCommerce companies will employ this peak season. The proportion of companies who will offer discounts as part of their peak season campaigns fell from 70% last year to 41%, while the most common level of discounting dropped from 21-30% to 11-20% this year. The overall wariness can also be seen in the changes to the planning cycle: by September last year, nearly 70% of eCommerce companies had already started their peak season planning: this year, that number sits at less than 40%.