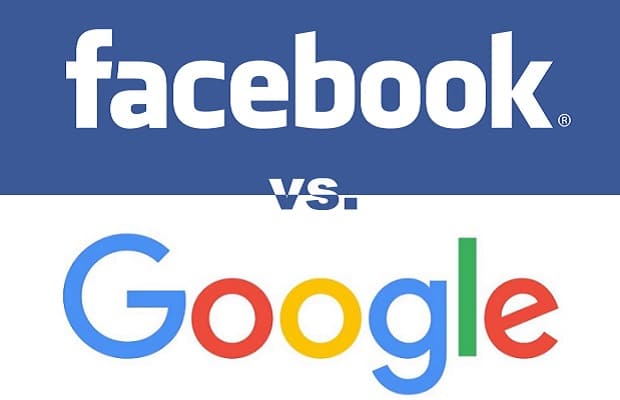 Google and Facebook will continue to dominate the digital advertising landscape in the UK, according to eMarketer’s latest ad forecast.

The two tech companies combined will account for more than half (54%) of all digital ad revenues this year, totalling £6.30 billion ($8.40 billion). 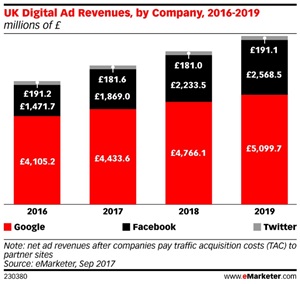 Facebook is expected reach £1.87 billion ($2.41 billion) in digital ad revenues this year and, thanks to the success of Instagram as well as further investment in video, growth is predicted through 2019. By that time, Facebook will take an 18.3% share of the digital ad market—amounting to £2.57 billion ($3.34 billion) in revenues, eMarketer estimates.

eMarketer’s forecast also shows that UK digital ad spending overall will reach £10.89 billion ($15.44 billion) by the end of 2017, increasing 11.0% year over year. Mobile continues to drive growth in digital ad spending—the format will rise by an estimated 30.3% this year. Within mobile, video has seen the most growth, increasing 47.7%. 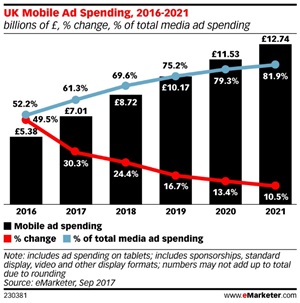 “There have been signs of tough times ahead for the UK ad industry,” eMarketer senior analyst Bill Fisher said. “Despite uncertainty around Brexit and struggles among some of the big agencies, digital continues to attract ad spending, with Google and Facebook the biggest beneficiaries. That they’re attracting such spend is perhaps a symptom of the wider market concerns, with brands looking to get the biggest reach for their buck—something that Google and Facebook clearly offer.”